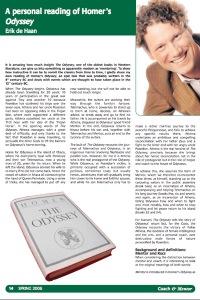 It is amazing how much insight The Odyssey, one of the oldest books in Western literature, can give us into something as apparently modern as ‘mentoring’. To show how instructive it can be to revisit the classics from time to time, I gladly share my own reading of Homer’s Odyssey, an epic tale that was probably written in the 8th century BC and deals with events which are thought to have taken place in the 12th century BC.