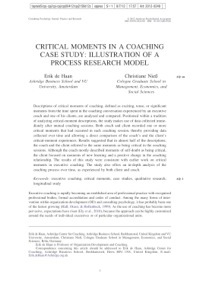 Illustration of a process research model

Descriptions of critical moments of coaching, defined as exciting, tense, or significant moments from the time spent in the coaching conversation experienced by an executive coach and one of his clients, are analyzed and compared. Positioned within a tradition of analyzing critical-moment descriptions, the study makes use of data collected immediately after mutual coaching sessions. Both coach and client recorded one or more critical moments that had occurred in each coaching session, thereby providing data collected over time and allowing a direct comparison of the coach’s and the client’s critical-moment experiences. Results suggested that in almost half of the descriptions, the coach and the client referred to the same moments as being critical in the coaching sessions. Although the coach mostly described moments of self-doubt as being critical, the client focused on moments of new learning and a positive change in the coaching relationship. The study also offers an in-depth analysis of the coaching process over time, as experienced by both client and coach.