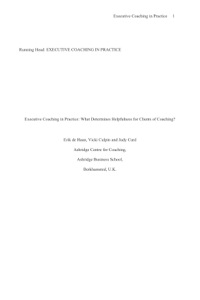 What determines helpfulness for clients of coaching?

Executive coaching is gaining in popularity, both as part of personal or organisational development programmes and as a tailored form of individual consulting. This study examined how various aspects of the executive coaching intervention make a difference to the clients of coaching themselves. The study involved a web-based questionnaire (163 closed and 3 open questions) completed by 71 executive coaching clients shortly after the beginning of their coaching contract and by 31 of those again approximately six months later.

The research found that clients’ appreciation of coaching was high. In response to the research question “What determines helpfulness for clients?” a picture emerged of a client valuing the relationship with and the qualities of the coach, while making little distinction between specific interventions of that same coach. The findings support the idea that common factors are at work in executive coaching, so that helpfulness is much less predicted by technique or approach as it is by factors common to all coaching, such as the relationship, empathic understanding, positive expectations etc.