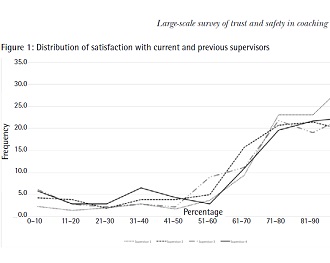 Some evidence that we are doing it right

There is increasing interest in supervision across the executive and workplace coaching professions, and so it is worth exploring whether promised benefits can be demonstrated. A large-scale empirical survey was conducted into the satisfaction, trust and vulnerability of coaching supervisees. Results are compared with those that have been achieved in other areas of supervision such as occupational therapy and counselling supervision.

With this sample of relatively senior coaches it appears that highly trusting and satisfactory supervision relationships are emerging, perhaps thanks to current practice where most coaches self-select and engage supervisors out of the proceeds of their own work. Nevertheless, even in this sample there are still just under eight per cent occurrences of insufficient trust and safety around really worrying episodes. There are also demonstrable differences within the overall diversity of the profession.